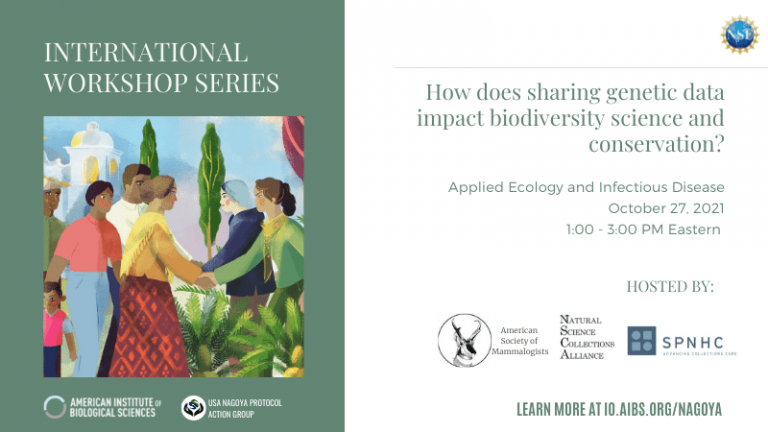 Emerging Pathogen Research Across the Americas

Digital Sequence Information (DSI), such as genetic sequence data, play a critical role in understanding and addressing infectious diseases. DSI about pathogens provides key information, such as mutation rate, provenance, and migration trajectories, which can all enable disease management in a variety of systems. Furthermore, exemplary research on zika, lyme disease, malaria, and SARS viruses have relied on international partnerships. Join us for this workshop to recognize and document the value of DSI for infectious disease research, and learn together how to navigate the Nagoya Protocol and national policies to conduct upstanding biodiversity science to benefit the planet.

·      Society for the Preservation of Natural History Collections

Understanding the international debate on Digital Sequence Information: What is at stake?

Luciana C. Silvestri is an environmental law researcher at the National Scientific and Technical Research Council (CONICET) in Argentina. She served as a legal and technical adviser to the Spanish Ministry of Environment for access and benefit-sharing (ABS) international negotiations. She was one of the experts contributing to the GEF UNEP IUCN Regional Project on ABS for Latin American and the Caribbean, where she focused on ensuring effective legal ABS frameworks and adequate institutional capacities in eight countries of the region. She also served as an expert to the Informal Advisory Committee to the ABS Clearing-House of the Nagoya Protocol. She has extensive expertise in international cooperation, international negotiations, biodiversity protection and ABS issues.

Marcelo Weksler is Full Professor and Curator of Mammals at the Museu Nacional, Universidade Federal do Rio de Janeiro, Brazil, where he is also part of the university-wide working group on Nagoya related issues. His scientific work focus on the taxonomy, phylogeny and biogeography of small mammals, such as rodents, marsupials and bats. He and his students are currently engaged in projects analyzing the biodiversity of Brazilian mammalian communities, and their role in harboring zoonotic etiological agents. He collaborates with researchers across South and North America and is interested in advancing our scientific knowledge and conservation of small mammals. Weksler holds a PhD in Biology from the City University of New York (CUNY, 2005).

Ecological approaches for the study of infectious diseases. Examples from Neotropical and Nearctic Mexico

Gerardo Suzán is a Doctor of Veterinary Medicine with a Master of Science in Ecology from the National Autonomous University of Mexico (UNAM), and PhD in Biology from The University of New Mexico. His research is on Disease Ecology, One Health and Ecohealth disciplines. He has worked in different countries including USA, Costa Rica, Panama, Mexico and Brazil. He is a Full-Time professor at the College of Veterinary Medicine at the UNAM and he belongs to the National Research System (SNI). He is a a member of the scientific committee of The Future Earth Health Knowledge-Action Network. He was recently assigned as the representative of Mexico for The Intergovernmental Science-Policy Platform on Biodiversity and Ecosystem Services (IPBES) in Biodiversity and Pandemics. He is a member of the Mexican Veterinary Academy and from the National  Academy of Medicine.

MEPA: Museums and Emerging Pathogens in the Americas

Jocelyn P. Colella, PhD, co-founded the virtual community of practice ‘Museums and Emerging Pathogens in the Americas (MEPA)’ in 2021. The multidisciplinary group is aimed at better connecting biorepositories with biomedicine to improve global capacities for emerging disease surveillance and response. Dr. Colella is Curator of Mammals at the University of Kansas (KU) Biodiversity Institute -- the 5th largest biorepository in the Americas and 2nd largest university-based collection. She is also Assistant Professor of Ecology and Evolutionary Biology at KU. Colella is an evolutionary genomicist who uses mammals as models to understand how organisms and their symbionts (parasites and pathogens) change across space and time.

View the recording of the workshop.