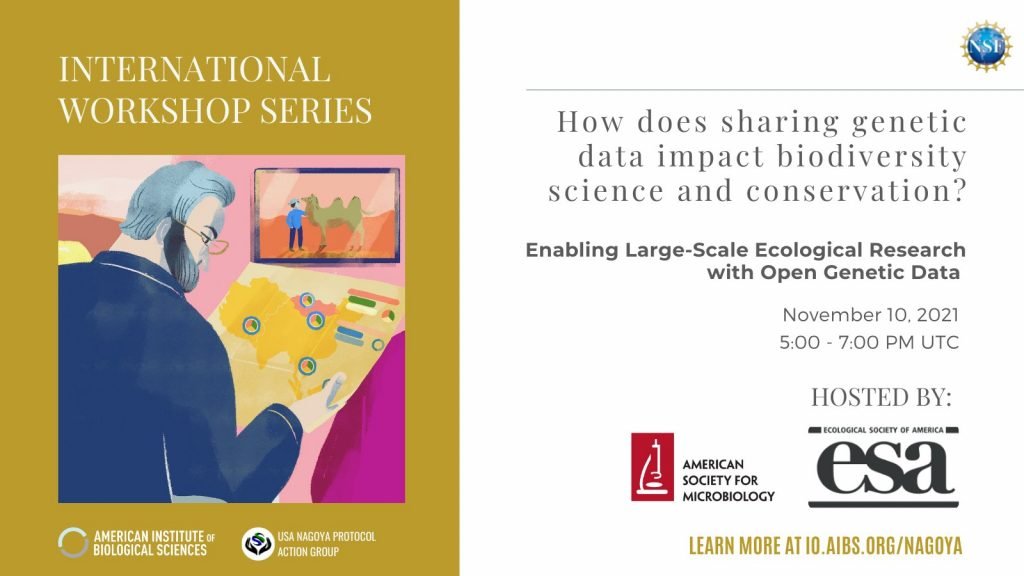 Macrosystems Biology and Long-Term Ecological Research integrates the specimens and data collected at individual sites to allow a robust understanding of the structure and functions of ecosystems over extended spatial and temporal scales. Join us for this workshop to recognize both the value and challenges of integrating open genetic sequence data with this long-term ecological research to unlock opportunities for predictive modeling of habitats and ecosystems.

Laura Rocha Prado is a biologist with a Doctoral Degree in Zoology. She is a beetle specialist with experience in Natural History Collections and programming. Originally from Brazil, Laura is currently working as Biodiversity Informatician at the Arizona State University, in Tempe, USA. Her responsibilities include developing and managing different online biodiversity portals from many scientific disciplines, creating and developing tools to aid scientific research, cleaning/processing Biodiversity Data and facilitating access to Biodiversity Data through public websites and APIs. She is an advocate for Open Science and Open Data.

Understanding the international debate on Digital Sequence Information: What is at stake?

Luciana C. Silvestri is an environmental law researcher at the National Scientific and Technical Research Council (CONICET) in Argentina. She served as a legal and technical adviser to the Spanish Ministry of Environment for access and benefit-sharing (ABS) international negotiations. She was one of the experts contributing to the GEF UNEP IUCN Regional Project on ABS for Latin American and the Caribbean, where she focused on ensuring effective legal ABS frameworks and adequate institutional capacities in eight countries of the region. She also served as an expert to the Informal Advisory Committee to the ABS Clearing-House of the Nagoya Protocol. She has extensive expertise in international cooperation, international negotiations, biodiversity protection and ABS issues.

Nico Franz is the Virginia M. Ullman Professor of Ecology and Director of Biocollections in the School of Life Sciences, Arizona State University (ASU). His research interests entail insect systematics and evolution, biodiversity data science, and the development of biocollections infrastructure and services. At ASU, he currently leads the Symbiota Support Hub, a domain within the Integrated Digitized Biocollections (iDigBio) project. He also serves as principal investigator of the National Ecological Observatory Network (NEON) Biorepository.

Capacity Building as a Way to Follow Nagoya: Examples from Mexico and Chile

Dr. Valeria Francisca Eugenia Leopoldina of María de Guadalupe Souza Saldivar holds a bachelor’s degree (1983), a master’s degree (1985) and a doctorate (1990) from the National Autonomous University of Mexico. She worked on two post-doctoral projects under the tutelage of Dr. Richard Lenski, first at the University of California, Irvine (1990-92), and second at Michigan State University (1992-93). She has served as a researcher at the UNAM Institute of Ecology since 1993. Dr. Souza’s research focuses mainly on understanding the evolutionary, physiological, and ecological processes that are involved in the adaptation, speciation, and diversification of the biodiversity of microorganisms. Much of her research and conservation efforts focus on microbial mats and communities in Cuatro Ciénegas, Coahuila, Mexico. Dr. Souza currently serves as the chief scientist for the project “Microbiome of the external Surface of keystone species of ecological and economic importance in the región the Magallanes y de la Antártica chilena: microbes as bioindicators of the aquatic ecosystem health in a global warming scenario” (R20F0009), which is supported by the government of Chile. Dr. Souza has received several awards and distinctions, including a fellowship for the development of leadership from the FLD-MacArthur Foundation Mexico, a National Conservation Award from the Ministry of the Environment and Natural Resources, and an Aldo Leopold Fellowship awarded by the Stanford Woods Institute. In 2019 she received the honor of being named an international member of the American Academy of Arts and Sciences, and more recently she was named an Environmental Stewardship Award by the Society of Freshwater Science. She is a member of the board of advisors of Earth Leadership Governance and is also part of the Mexican delegation to the ISO (International Standards Organization) of the UN on Biodiversity.

View the recording of the workshop.​

We are a collective of people from different scientific societies who all use this account to occasionally provide comment or relay a question or use-case from our communities.