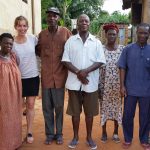 In 2012, I received a postdoctoral fellowship from the National Science Foundation to do genomics research on African rice to understand selection for salt tolerance. High salinity is a major agricultural challenge affecting >50% of land used for growing crops around the world. To do this project, I analyzed whole genome sequences from close to 100 landraces or traditional cultivars of African rice from public germplasm collections at the USDA, at the International Rice Research Institute, and at AfricaRice. These accessions were collected in the 60’s and 70’s and fall under the International Treaty for Plant Genetic Resources because they are in the genus Oryza. This means people can freely use them for breeding for food and agriculture but not for cosmetic or pharmaceutical purposes unless they follow provider consent and mutually agreed terms for such a use just like the Nagoya Protocol requires.

The genomics research questions I asked were about salt tolerance and selection for environmental tolerance, which are agricultural questions that fall under the regulation of the International Treaty on Plant Genetic Resources for Food and Agriculture. However, I was also asking historical questions about domestication history, which included evolution of the crop under different cultural periods and cultural interactions such as human migration events. I believe this still falls under the Treaty, but it could be under Nagoya.

Several salt tolerant lines were found from phenotyping and were entered into breeding programs at the International Rice Research Institute, one of the international collaborating institutions in the Philippines. I have no connection with the downstream uses of these.

Several salt tolerance candidate genes were identified from association of phenotype with DNA sequence data, and these may be useful to crop improvement programs for food and agriculture in Oryza (rice) and in other crops outside of rice.

Domestication theory for Africa has substantially improved from this research. This was the first crop to show domestication was occurring thousands of years earlier than previously thought in sub-Saharan Africa.

Genomes of African rice that are now publicly available are being use internationally to discover additional gene mutations of interest for crop improvement. A new collaboration has begun that connects AfricaRice with the Chinese Agricultural University and me. We have published two papers where the genome data, gene functional characterization, and farmer interview data helped us understand and contextualize the phenotypic change that happened throughout history in the domestication of African rice.

Attention is turning to the preservation of African rice farms that have been disappearing along with their germplasm.

My outreach experience from this postdoctoral fellowship led her to pursue a AAAS Science Policy Fellowship at NSF. I ended up helping to initiate up a grant co-funding partnership between an African country (South Africa) and the US National Science Foundation.

There is now a stronger connection between ethnobotany and genomics.

An AfricaRice collaborator in Senegal won an award within AfricaRice as a result of his work with us. He is continuing to do African rice salt tolerance GWAS and his students have benefited from the crosstraining provided by Meyer and colleagues from NYU while in Senegal.

Undergraduate interns involved in the research are now in science careers (teaching and veterinary science) and are very active to promote biodiversity conservation and high ethical standards.

I did fieldwork in 2015 in Benin, Togo, and Senegal, that was funded by a National Science Foundation supplement. I was required to articulate in writing how I was going to carry out my work in a way that was compliant with the Nagoya Protocol compliant and International Treaty. At the time of fieldwork, there were not yet focal point contacts for the countries I was going to, nor was there a US Dept of State office to contact (now there is and they are really helpful).

I applied for and obtained IRB exemption. My colleagues all took IRB ethics training (CITI certification).

To be compliant, I used the Institutional Review Board mechanism of my university to develop a consent form, a interviewee recruitment strategy, and a set of interview questions that would be unlikely to put participants at risk. Once I passed my institutional approval, I sent materials to collaborating partners I had identified at AfricaRice in Benin and Senegal. I initially proposed a set of mutually agreed terms for collaboration, and they were evaluated satisfactorily by my collaborators, but not by the AfricaRice institution leadership. I went there, met with collaborators and leadership, revised the terms to the point they were satisfied, and began my fieldwork.

Here is the consent form I used to do fieldwork: Meyer_Africa_Consent_form

I was working through multiple layers of translation. I would speak or present written material in English, then it would be translated into French orally, and then by another person into the local language orally. I audio recorded the oral explanations of the material and the interviewee giving consent prior to every interview. I transcribed these records later into written documents.

The benefits I articulated for participating in the survey were that this would contribute to helping people overcome challenges to farming in high salinity environments.  I also offered access to the full interview report and project report. The explanation of societal benefits and access to the interview results was sufficient for people, however during the interviews, I did also note additional ideas for how people wanted help. I documented the farmer concerns and shared them with local authorities who were going to try to help, by way of increasing field trial collaborations and aiding in equipment purchases. One concern was that if a crop fails one year, the lineage of seeds may be totally gone. We offered to make ex situ collections of varieties the farmers donated, which they can access in future years in the national public seed bank. This was an example of benefit sharing that I had not written in my mutually agreed terms because part of my mutually agreed terms was that I would not make any new rice collections to take to the United States. However, if I were to do this again, I would certainly write ‘assistance in growing national collections in host country’ as part of the work, and put in writing that providing an accession number back to the farmer and instructions for future access would be a benefit.

I am still publishing from this work, and will follow the mutually agreed terms with my collaborators to include a set of people as co-authors who contributed to the research fieldwork. Because I wrote these commitments down and submitted them to my funding agency and to my collaborating institutions, if I deviate from my commitments and my international collaborators are dissatisfied, I would be held responsible to revise my work to meet the terms.

I believe this trust from co-developing the Nagoya Protocol compliance terms has built a stronger relationship with my collaborators, and we have now co-authored several papers and have discussed beginning new projects together. We maintain contact largely via social media.

my PIC
Tags: prior informed consent