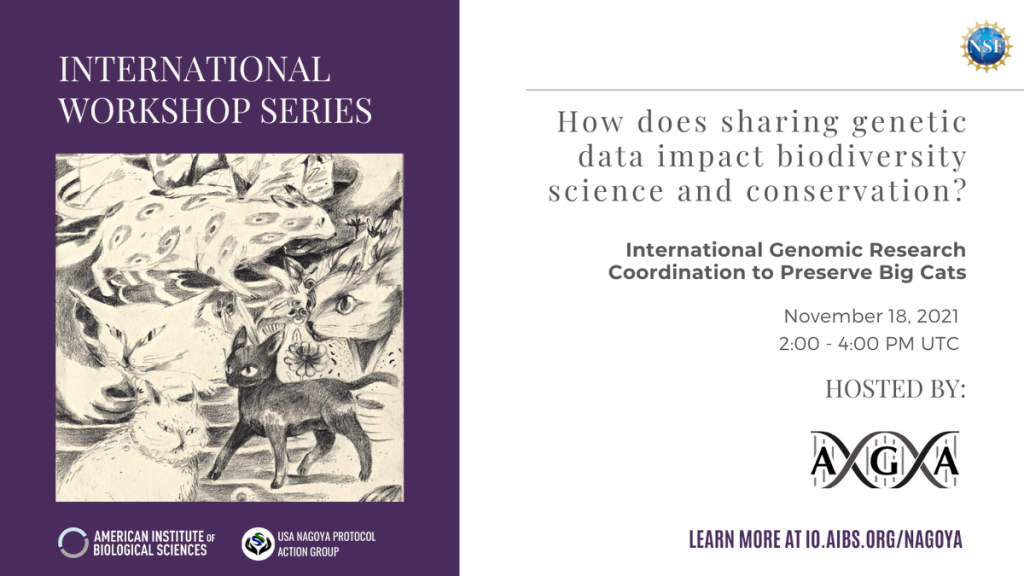 Drs. Ryder, Luo, and colleagues have collaborated on projects to understand the evolution and genetic diversity in feline species around the world. Join us in a discussion on their efforts from frozen zoos to genebanks and international coordination activism to conserve tigers, panthers, and other megafauna.

Dr. Oliver Ryder serves San Diego Zoo Wildlife Alliance as the Kleberg Endowed Director of Conservation Genetics. He oversees research activities in the areas of molecular genetics, genomic studies, and genetic rescue efforts, including stem cell applications – all focused on reducing extinction risk and contributing to species recovery and sustainable populations. He guides the strategic development of efforts to develop and expand a global network of cryobanking facilities, especially for viable tissue culture cells. Oliver has contributed to key studies relevant to conservation management efforts for gorillas, California condors, black rhinos, Przewalski’s horses, Anegada iguanas, bighorn sheep, and other species. He participates in developing studies that link conservation efforts for small managed populations of wildlife under human care with larger landscape scale efforts for wildlife populations in native habitat. He is co-organizer of the Genome 10K project and is a member of the Steering Committee for the Vertebrate Genome Project that aims to sequence the genomes of 10,000 vertebrate species to reveal the amazing genetic diversity of this group of animals and apply this knowledge to the stewardship of wildlife on our planet.

Shu-Jin received her B.S. in Biochemistry and Molecular Biology from Peking University. She completed her Ph.D. in Conservation Biology from University of Minnesota-Twin Cities, USA, in 2006. She then worked at the National Cancer Institute, Maryland, as a NIH Postdoctoral Fellow, where she studied evolution, phylogeography and population genetics in the tiger, leopard cat, and other Asian species. In 2009, she became a Principal Investigator at Peking University and set up the Laboratory of Genomic Diversity and Evolution. She is a member of the IUCN Cat Specialist Group since 2005 and is broadly interested in the genomic basis of evolution and adaptation in mammalian species. Her lab at Peking University, China, focuses on genomic diversity and evolution to bridge the traditional fields of wildlife ecology and biogeography to the cutting-edge advances in genomics and bioinformatics. Luo led research elucidate the tiger’s molecular evolutionary history and identified the Malayan tiger as a subspecies named Panthera tigris jacksoni. Her more recent work involves the identification of the genetic basis of the white tiger pelage and the Asian short-tailed domestic cats, and population genomic studies on multiple Asian felids including the tiger, leopard, leopard cat, fishing cat, marbled cat, golden cat, and the Chinese mountain cat.

Dr. Rebecca Adler Miserendino is a public health and environmental scientist with over a decade of professional experience in both academic research and international policy. As the leader of both the environment and international teams at Lewis-Burke, Rebecca advises scientific society and university clients to: (1) understand the impact of international policy issues on scientific research; (2) identify international and domestic budget and policy trends; (3) develop strategies to take advantage of emerging opportunities relevant to both scientific research and sustainable development. In this role, she has been active member of the USA Nagoya Protocol Action Group on behalf of her clients. From 2013 to 2020, Rebecca served as a Senior Adviser, Foreign Affairs Officer, and Physical Scientist at the U.S. Department of State (DOS) in the Bureau of Oceans and International Environmental and Scientific Affairs. In this capacity, she negotiated on behalf of the United States and advised senior U.S. officials on a variety of crosscutting matters to advance U.S. global environment, climate, and health priorities.

View the recording of the workshop.​​

We are a collective of people from different scientific societies who all use this account to occasionally provide comment or relay a question or use-case from our communities.